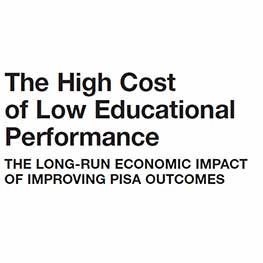 ORGANISATION FOR ECONOMIC CO-OPERATION AND DEVELOPMENT

The OECD is a unique forum where the governments of 30 democracies work together to address the economic, social and environmental challenges of globalisation. The OECD is also at the forefront of efforts to understand and to help governments respond to new developments and concerns, such as corporate governance, the information economy and the challenges of an ageing population. The Organisation provides a setting where governments can compare policy experiences, seek answers to common problems, identify good practice and work to co-ordinate domestic and international policies.

OECD Publishing disseminates widely the results of the Organisations statistics gathering and research on economic, social and environmental issues, as well as the conventions, guidelines and standards agreed by its members.

In response to the need for cross-nationally comparable evidence on student performance, the Organisation for Economic Co-operation and Development (OECD) launched the OECD Programme for International Student Assessment (PISA) in 1997. PISA represents a commitment by governments to monitor the outcomes of education systems in terms of student achievement on a regular basis and within an internationally agreed common framework. It aims to provide a new basis for policy dialogue and for collaboration in defining and implementing educational goals, in innovative ways that reflect judgements about the skills that are relevant to adult life.

Results of the three-yearly PISA surveys reveal wide differences in the performance of education systems in terms of the learning outcomes achieved by students. For some countries, the results from PISA are disappointing, showing that their 15-year-olds performance lags considerably behind that of other countries, sometimes by the equivalent of several years of schooling and sometimes despite high investments in education. However, PISA also shows that other countries are very successful in achieving strong and equitable learning outcomes. Moreover, some countries have been able to significantly improve their learning outcomes, in the case of Poland by almost three-quarters of a school year between 2000 and 2006 alone.

This report uses recent economic modelling to relate cognitive skills as measured by PISA and other international instruments to economic growth. The relationship indicates that relatively small improvements in the skills of a nations labour force can have very large impacts on future well-being. Moreover, the gains, put in terms of current Gross Domestic Product (GDP), far outstrip the value of the short-run business-cycle management. This is not to say that efforts should not be directed at issues of economic recession, but it is to say that the long-run issues should not be neglected.

The report was written by Prof. Eric. A. Hanushek from the Hoover Institution at Stanford University and CES ifo and by Prof. Ludger Woessmann from the Ifo Institute for Economic Research, CES ifo, and the University of Munich, in consultation with members of the PISA Governing Board as well as Andreas Schleicher, Romain Duval and Maciej Jakubowski from the OECD Secretariat. The report was produced by the Indicators and Analysis Division of the OECD Directorate for Education and is published on the responsibility of the Secretary-General of the OECD.

While many nations express a commitment to improved educational quality, education often slips down on the policy agenda. Because the benefits of educational investments are seen only in the future, it is possible to underestimate the value and the importance of improvements.

This report uses recent economic modelling to relate cognitive skills as measured by PISA and other international instruments to economic growth.This relationship indicates that relatively small improvements in the skills of a nations labour force can have very large impacts on future well-being. Moreover, the gains, put in terms of current GDP, far outstrip todays value of the short-run business-cycle management. This is not to say that efforts should not be directed at issues of economic recession, but it is to say that the long-run issues should not be neglected.

A modest goal of having all OECD countries boost their average PISA scores by 25 points over the next 20 years which is less than the most rapidly improving education system in the OECD, Poland, achieved between 2000 and 2006 alone implies an aggregate gain of OECD GDP of USD 115 trillion over the lifetime of the generation born in 2010 (as evaluated at the start of reform in terms of real present value of future improvements in GDP) (Figure 1). Bringing all countries up to the average performance of Finland, OECDs best performing education system in PISA, would result in gains in the order of USD 260 trillion (Figure 4). The report also shows that it is the quality of learning outcomes, not the length of schooling, which makes the difference. Other aggressive goals, such as bringing all students to a level of minimal proficiency for the OECD (i.e. reaching a PISA score of 400), would imply aggregate GDP increases of close to USD 200 trillion according to historical growth relationships (Figure 2).

Blueprint for Building a 21 st Century Worker
Psychometric Properties of the Penn Computerized Neurocognitive Battery
Rethinking Remediation in Higher Education
Empirical Validation of an On-line Literacy Program using DIBELS for Title I Students-Naglieri
This website uses cookies to improve your experience. We'll assume you're ok with this, but you can opt-out if you wish. Cookie settingsACCEPT
Privacy & Cookies Policy