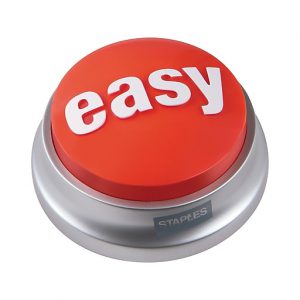 On Super Bowl Sunday, my 8-year-old nephew graciously tolerated the adults in our house (most of whom are still 8 years old at heart, if truth be told). He held his own in a game of guessing what the next commercial would be on television (cars? beer? fast food? insurance?), as well as Crazy Eights and Pokeno. But a self-created game of That Was Easy! was the highlight.

I wish I could remember what started it, but something he did was rewarded with a punch on a Staples Easy button. Then it was Katie, bar the door. He wanted more challenges . Which the adults were happy to offer. Can you do the Macarena? Spell a difficult word? Explain the insects he is studying? Decipher a puzzle? He was eager for each successive challenge.

Whatever we asked, he was willing to try. When he was successful, it upped the energy and the motivation. When he couldn’t do it, he wanted to try again. The motivation wasn’t money or candy or something else  all this motivation was intrinsic and the idea that whatever he would do was easy. Doing something and calling it easy gives him more room to grow, to find things that aren’t easy and then for those to become easy.

It made me think about what we sometimes hear from parents or teachers when they watch their student playing BrainWare SAFARI. They’ll say, Oh, that’s so hard. Johnny (or Susie) won’t be able to do that. What then typically happens is that Susie (or Johnny) rises to the challenge and parents and teachers are amazed. Johnny or Susie may or may not be amazed. Sometimes it’s a case of That Was Easy! And sometimes it’s a case of repeated attempts until his/her skills are developed to the point of mastery.

So the next time you confront a challenging project, think about accomplishing it and then hearing That Was Easy! That challenge is now not the limit of what you can accomplish  it’s a new starting point.

Spider Webs: A Halloween Reminder of How Our Brains Work
Some Thoughts on Learner Variability
Digital Assistants that Seem Too Human May Not Work Best
3 Keys to Building Individual Learning Capacity
This website uses cookies to improve your experience. We'll assume you're ok with this, but you can opt-out if you wish. Cookie settingsACCEPT
Privacy & Cookies Policy