Talk Like a Pirate Today and Make it Serious Language Play 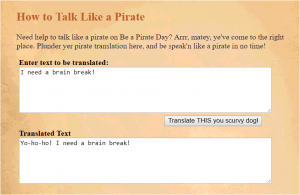 Talk Like a Pirate Today and Make it Serious Language Play

Today is Talk Like a Pirate Day. Sometimes it’s the silliest things that get us thinking. And in this case, it got me thinking about language. Not treasure chests and walking the plank and bottles of rum, but language. Of course, pirates didn’t talk the way we imagine them. But it is still fun to roar, “Argh!” Or to exclaim,”Shiver me timbers!” As silly as it is. But maybe not so silly.

In fact, playing with language is a cognitive milestone, one I noted recently in my 3 ½-year-old granddaughter. One day she started singing nonsense to the tune of a song she knows very well. I asked her, “What language is that?” Her answer: “It’s a real language.” I’m still not sure what was “real” to her about those nonsense syllables, but I can’t deny that she was having fun with it.

And then I started to think that, soon, her parents will no longer be able to spell out words like “i-c-e c-r-e-a-m” or “b-e-d t-i-m-e” to communicate something they don’t want her to understand. I see “Pig Latin” in their very near future. The rules vary, but in general, to speak Pig Latin, you move the first sound to the end of the word and then add “ay” to it. If the first letter is a vowel, a “y” or a “w” is inserted just before it. So, Pig Latin is Igpay Atinlay. I speak Pig Latin become Iway eakspay Igpay Atinlay. (Please note that there is no Spellcheck for Pig Latin. You will just have to suffer all that squiggly red underlining. Also, I might point out that some people would only move a single phoneme from the beginning and say peaksay, instead of eakspay).

All of this got me started thinking about the cognitive skills required for this word play. Sequential processing (and resequencing the sounds) is needed. And a fair amount of working memory, to hold the word in mind while manipulating the order of the sounds. Inhibitory control is what would help us avoid blurting out the normal form of a word. Thus, it makes sense that this will be beyond the cognitive capacity of a three- or four-year old. At least for a short time. Given how quickly we learn languages when we are young, it probably won’t take my granddaughter long to learn what an ookiecay is.

Just like it wouldn’t take her long if she were in a French-speaking family to figure out that lisquitbem means biscuit (cookie). Or if she spoke Spanish to understand that popostrepe means postre (desert). Yes, indeed, most languages have their “gibberish” modes, sometimes referred to as secret languages or just language play.

Lest you think for a moment that these are not in some way legitimate uses of language, or that they are unable to enter our dialogue and become common parlance the way that “LOL” and “bling.” You have probably heard the term “ixnay,” in answer to a question about whether you could do or have something. That Pig Latin form of the word “nix” has entered common parlance.

So as I explored all this language play, I concluded that it is a wonderful form of cognitive exercise. And talking like a pirate (with a twist I will explain in a moment) could accomplish the same thing.

By talking like a pirate, I don’t mean simply throwing an occasional “argh” or “yo-ho’ho” into your conversation. Instead, it’s about creating a language based on a simple rule that we can all follow. As one example, let’s create a version of Piratese that places “argh” after each consonant. Thus, cookie would become carghookarghie. Still sounds tasty, doesn’t it?

It will take a little practice but get a friend or relative to join in for a little brain-stimulating fun. And you can start with the following.