Learning to Be Smart 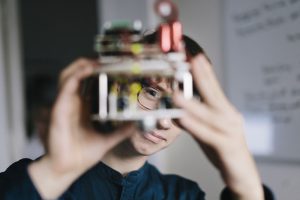 Learning to Be Smart

Back in 2011, researchers at University College London offered dramatic, direct evidence that intelligence can change after early childhood.  The study was characterized as providing “new hope for boosting the brain’s abilities.”

In the study, there was no purposeful intervention or attempt to change the participants’ intelligence, but some teens experienced gains or losses in IQ of as much as 20 points.  The results suggested to some that intentional efforts could have an impact.  Dr. Frances Jensen, a neurologist at Harvard Medical School and Children’s Hospital Boston, said, “It suggests there’s still plasticity at this stage … so you can still work on weaknesses and enhance strengths.”

Based on what we have been hearing in the last few days from therapists working with individuals in their teens and 20s, there is plenty of plasticity to take advantage of.  What they’ve shared with us underscore how pioneering this field is and the amazing plasticity of intelligence.

One client wrote to us about a young man in his 20s classified as Educable Mentally Handicapped. The term is also expressed as Educable Intellectual Disability and refers to individuals with a mild or high-moderate degree of intellectual disability, that is, with IQs in the 50 to 70 range.  The “educable” descriptor suggest that these individuals are capable of achieving approximately a fifth-grade academic level.

This young man used BrainWare SAFARI cognitive training software for 18 months* and completed all 168 levels in the program.  When he was recently assessed using the Wechsler Adult Intelligence Scale (WAIS), his IQ was measured as average (85 to 115).

A couple of days before, we heard about a young lady on the autism spectrum.  She used BrainWare SAFARI for a number of months with her learning specialist and then wanted to continue the program on her own because she enjoyed it so much.  All in all, she has been using the program for a little over 2 years*, logging 403 sessions and has completed 158 of the 168 levels in the program.

Her mother reports that she has improved in many areas.  “She is more focused and her communication, comprehension and analytical skills have improved exponentially.  In addition, she no longer has any inappropriate behaviors and her self-esteem has greatly improved.”  Mom also reports that her daughter has enrolled in state college where she has gotten A’s in her first two courses – Algebra and Art.

These are remarkable stories that emphasize that we are not born smart or dumb, but develop intelligence of time, and have far more ability to impact our intelligence than most realize.

* The typical protocol for using BrainWare SAFARI is 3 to 5 times a week for 12 to 14 weeks.  In our research, this kind of usage leads, on average, to significant improvement in cognitive skills. These examples demonstrate that some individuals can benefit from a more extended protocol.

What Great Teachers and Great Salespeople Have in Common
The Role of Cognitive Remediation in Special Education
Does Physical Exercise Trump Mental Exercise?
When Brain Training Works - Points of Controversy
This website uses cookies to improve your experience. We'll assume you're ok with this, but you can opt-out if you wish. Cookie settingsACCEPT
Privacy & Cookies Policy