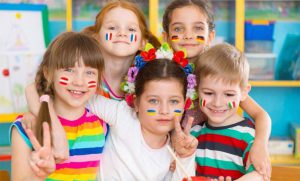 Today, more schools than ever are challenged with providing an education to children who speak little or no English when they enter the school system. We hear more frequently of districts, schools and even individual classrooms with multiple foreign languages being spoken. Integrating students who speak a foreign language into mainstream classrooms is complicated by the difficulty of teaching language to large groups, especially those that are culturally diverse, and by the requirements for knowledge acquisition for standardized tests.

An individuals ability to achieve fluency in his/her native or a second language depends on an integrated activity of diverse systems in the brain. For example, while the sounds of language are heard in the auditory area of the brain, they must be responded to by the speech area. The speaker must listen to his or her own speech in order to tell whether the intended sounds have been produced correctly. This coordination is intensified when practicing speech in a foreign language.

In the early stages of learning a new language, most learners translate back and forth from the first language to the new one, unless the two languages are being learned contemporaneously in early childhood). As fluency is achieved, the need to translate diminishes and the ability to directly access and correlate concepts and words in the new language increases. Thus, the demands on certain cognitive skills are even greater during the early learning stages. The learner needs strong working memory, sequential memory, and auditory memory skills while learning to process new sounds and words.

When learning a foreign language has been preceded by learning to read and write in a first language, the visual and kinesthetic areas of the brain may also be involved, if only to remember the words seen on the page, or to imagine how to write them in an exercise. In many cases, learning a new language in a combined visual/textual and auditory manner can promote better retention. This enables the learner to attach meaning while developing the new language by relying on the visual image that already looks familiar in the first language. Recognizing words and images helps incorporate them into a distributed system of processing across multiple areas of the brain. Thus, strengthening visual and auditory processing systems will aid new language learners in the process of becoming fluent.

The use of language requires simultaneous coordination of left-brain sequencing skills and right-brain whole-pattern skills. In other words, in order to speak a sentence, one must feel the overall meaning and shape of the thought that is being verbalized and simultaneously get the words in the proper sequence (and deal with other conventions of syntax). In addition, since language expresses feeling, the limbic system must be involved as well. Increasing the brains ability to process multiple systems at the same time is foundational to building fluency.

Because of the importance of multiple system processing, students who receive training in basic cognitive skills, particularly in auditory and visual discrimination, attention, memory and sensory integration, are often able to learn a second language more quickly. This has significant implications for ELL students since cognitive training will enable them to respond better in the classroom and to pick up the language from their surroundings more readily.

BrainWare SAFARI provides training in 41 cognitive skills required for language acquisition, particularly the ability to confront unfamiliar patterns and to make sense of them quickly and easily. Improving the brains pattern recognition and manipulation ability enable it to be more attentive and receptive to new stimuli, as well as more effective in relating it to previously learned patterns and to remember them.

In addition, the pattern-recognition and processing speed skills that BrainWare develops will cause the learner to recognize more unfamiliar patterns moment by moment, and thus sort out and begin to interpret and encode the linguistic patterns in which words are sorted in grammatical and syntactical ways peculiar to the target language. The development of timing and rhythm which BrainWare Safari promotes can also have a profound effect on language ability and will help those learning to hear, see and speak new patterns and rhythms.

The exercises in BrainWare designed to develop short- and long- term memory will also aid in the acquisition of a new language. The exercises place demands on various memory skills in the context of responding to increasingly familiar, but also increasingly complex, patterns, making the eliciting of automatic responses a great deal more rapid than normally happens in the classroom. This parallels the desired development of automaticity in the recall of vocabulary in fluent speakers.

In summary, BrainWare SAFARI is a program that builds the cognitive skills that underlie the ability to discriminate sounds and images, to recall information, to hold greater amounts of information in working memory, to recognize patterns, and to integrate multiple mental processing skills at an automatic level. Thus, by enhancing underlying cognitive skills, BrainWare SAFARI can help ELL students learn their new language more efficiently and effectively.

Neuroscience and Special Education
A cognitive neuroscience based computerized battery for efficient measurement of individual differen...
Future Teachers Have Only Shallow Understanding of Learning Science
Research Summary - BrainWare SAFARI and Students with Learning Disabilities
This website uses cookies to improve your experience. We'll assume you're ok with this, but you can opt-out if you wish. Cookie settingsACCEPT
Privacy & Cookies Policy