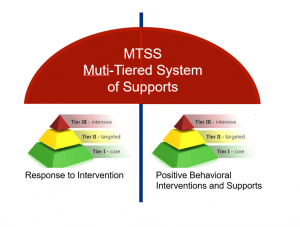 Education is grappling with a relatively new acronym: MTSS (Multi-Tiered Systems of Support). MTSS is currently conceptualized as an integration of two other acronyms: RtI (Response to Intervention) and PBIS (Positive Behavioral Interventions and Supports) (McIntosh, 2016). Simply stated, MTSS seeks to meld the systems of interventions provided for students for academics and for behavior.

The integration of the two systems is typically justified based on the correlation between student behavior and academic progress. Students with behavior problems tend to perform worse academically and students who perform poorly academically tend to manifest behavior problems. MTSS asks educators to try to discern which is causing which, for individual students. That is, is Eddy acting out in an effort to avoid academic tasks with which he struggles? Or is his behavior a plea for attention from adults or peers? Based on an understanding of the root cause, educators would then determine which of the available academic and/or behavioral interventions should be provided.

EF are the directive capacities of our brains and refer to attention, working memory, inhibitory control, and cognitive flexibility. Thus, for example, a student who has difficulty sustaining attention or being selective in attention (screening out distractions), may lose focus during the decoding of a word or while linking words together to make meaning. That student is also likely to be less effective in listening to another person’s perspective or remembering instructions, resulting in inappropriate or unacceptable behavior. This is just one example of the cognitive skills that are common to academic performance and social and emotional competence.

In the past, such information has not been readily available to teachers or educational teams. Today, advances in neurocognitive assessment and technology make such assessment accessible and affordable.

In the past, it has also been assumed that weaknesses in cognitive processes, such as EF, were not amenable to remediation. As a result, interventions have focused on accommodations and other strategies that support students in working around their cognitive weaknesses. Today, tools and techniques for remediation of EF and other underlying cognitive skills are also accessible and affordable.

Understanding an individual student’s cognitive strengths and weaknesses can mitigate some of the trial and error that is so often characteristic in the application of interventions and strategies in both RtI and PBIS. Especially now, when the two are coming together in the form of MTSS, an understanding of the common underpinning of executive functions and other cognitive skills is more important than ever.

Boys and Girls: How Different Are Their Brains?
What Is Cognitive Literacy?
A New Framework for Social and Emotional Learning Based on Cognitive Skills
Am I Smarter than a Fifth Grader?
This website uses cookies to improve your experience. We'll assume you're ok with this, but you can opt-out if you wish. Cookie settingsACCEPT
Privacy & Cookies Policy