Cognitive Learning Theory is a broad concept focusing mainly on understanding an individual’s mental processes–how the brain processes information, and how this enables effective and efficient learning. The theory characterizes how mental processes are affected by both internal and external factors, in which the stimuli from the outside world undergo cognitive processing and in turn affect our behavior.

Cognitive Learning Theory is credited to educational psychologist, Jean Piaget, who believed that intelligence can be improved over time and studied the nature of how our brains acquire new information. Piaget’s theories revolved not only on understanding how knowledge is acquired by children, but also on understanding the true nature of intelligence. He believed that intelligence grows and develops as we take active roles in learning and that while interacting with the world, we continue to grow, adapt, and add and integrate both new and existing knowledge to accommodate learning.  His theories have been supported by subsequent neuroscience research.

Learning starts with the process of receiving information from the outside world.  Individuals exposed to the same environment will take in different information as their brains prioritize different information based on their prior experiences.  The process continues with perception.  At this stage, information is given meaning, again based on prior knowledge and the circumstances in which the information is received.  If the information has sufficient relevance and importance, the brain will encode it and connect to networks of information already in the brain, sometimes called schema.  Finally, the information can be acted upon.  These actions, such as making a decision, speaking or physically acting on something, involve the directive capacities of our brains.  All of these stages of processing involve cognitive skills. 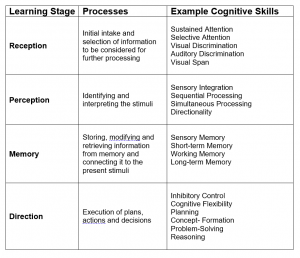 Cognitive Learning Theory then proceeds to consider the external factors that are most conducive to learning, focusing on the whole experience of how the individual learner interacts with information. The goal is to develop meaningful connections from the new learning material to existing neural networks in that individual’s brain.

The development of meaningful connections for new information can be enhanced with specific learning strategies.  These include reciprocal or peer teaching, using metaphors and analogies, mnemonics, story-telling, and role-playing. Each of these strrategies enables the learner to rehearse and elaborate information, strengthening its connections to other neural networks.

The prominence of Cognitive Learning Theory continues to expand based on deeper understanding of the role of both internal (cognitive skill) factors and the accumulation of the base of evidence of the external (environmental) factors that are likely to foster the effective and efficient acquisition of skills and knowledge.