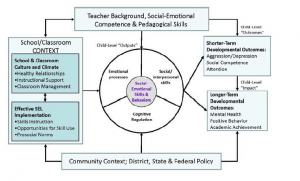 Social and Emotional Learning (SEL) is an active topic of discussion in schools (and outside of schools, for that matter) these days. The interest in SEL is likely being driven by a variety of factors, including federal policy (the Every Student Succeeds Act) which adds social, emotional and behavioral factors to academic measures. Another factor is the growing evidence of the positive impact on student learning of anti-bullying, trauma-informed care, and other similar initiatives.

Getting a handle on what SEL should do is not easy, however. The types of skills included in SEL programs vary widely and there is no common understanding or consensus on which skills should be the focus of school-based or out-of-school programs. In a recent survey we conducted, respondents emphasized self-management skills, decision-making, and relationship management as among the most important, but a variety of other skills were also felt to be important. As a recent report supported by the Wallace Foundation says, “Researchers, educators and policy-makers alike are beset by dilemmas about what exactly is included in this broad domain.”

The Wallace report, which is the source of the graphic that accompanies this article, introduces a useful framework for categorizing social and emotional skills, organizing skills into five categories:

We believe there is a strong argument that social and emotional competence is founded on and requires cognitive regulation skills. It is hard to imagine that emotional regulation could be practiced without inhibitory control or that conflict resolution is possible without cognitive flexibility. And indeed, there is now a strong body of evidence that executive functions are highly predictive of school success, including both academic and social-emotional facets. In one study of children with autism, executive functions correlated with parent reports of their childre’s social competence, but SEL interventions were not. And many have concluded that executive functions are the single best predictor in general of school readiness.

The Center for the Developing Child at Harvard University discusses executive functions in a recent summary of findings characterizing them as essential “skills for life and learning.” The report connects behaviors such as being aware of our own emotions and the emotions of others, leadership, decision-making, teamwork and working towards goals directly to executive functions. The writers conclude that executive functions deserve “much greater attention” in education.

The research on BrainWare SAFARI cognitive training software consistently shows an impact on executive functions and many even more basic receptive, perceptive and memory processes. For example, in one peer-reviewed published study, students with significant deficits in working memory and executive functions improved those skills to the point that they closed the gap to normally developing levels.

While educators are often interested in cognitive training because of the improvements it can yield in academic performance, a comprehensive perspective on Social and Emotional Learning suggests that such training could be an important first step in developing social competence.

Jones, S, et. al. (2017). Navigating SEL from the Inside Out. Harvard Graduate School of Education with funding from the Wallace Foundation.

Gamification in Education: Fostering a Growth Mindset
The Role of Cognitive Remediation in Special Education
Scientists Can't Find Specific Genes for IQ
Left-Brained or Right-Brained? You're Asking the Wrong Question
This website uses cookies to improve your experience. We'll assume you're ok with this, but you can opt-out if you wish. Cookie settingsACCEPT
Privacy & Cookies Policy